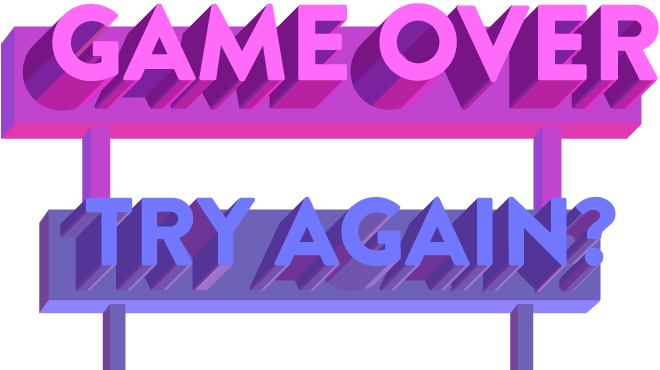 Until last year I was Creative Director of a company called Littleloud. Through thirteen long years we forged through many highs and lows. We made things like this.

Here’s a game about Georgian London and hanging people.

Here’s a game about making clothes and children as handily cheap resources.

So that was us. Now let’s talk about failure.

You see I’m not sure fail is always the right word. Don’t get me wrong. I have nothing against failure as such, but the term ‘fail’ is thrown about like a positive mantra. No one goes out of their way to fail. It is rarely a goal, unless it’s worked into your business plan somehow…

The main failure these fellows had, was a failure to fail.

The problem is that the term fail (fail fast, fail often etc etc) is thrown about nearly as often as that juggernaut of hyperbole, innovation, and without actually looking at what failing actually means.

Like success, failure needs qualifying. Sometimes things just fail, like a liver, or a marriage, or a heart. So what they actually do is die. And sometimes these things die from old age and sometimes they die from stupidity.

So let’s put a positive spin on things shall we?

Maybe the term we should be using is varying degrees of success? Instead of thinking, “I have consistently failed to write this article on failure”, I should say “I have managed to successfully write a thing about failure, eventually.” This is all getting a bit meta isn’t it?

What we should remember from the process of creating is that we’re always learning, and that we should always keep learning. We in fact rarely learn that much from success. William Goldmans quote, “Nobody knows anything…” isn’t thrown about copiously for nothing. What we do learn from though, is all the wrong paths taken to get from A to B.

What this really means is that it’s OK to make a mess, to get it wrong, as long as you learn, evolve. You manage your mistakes, admit them, discuss them and try to learn from them. The worst people to deal with are those who can never admit to making mistakes. They see that as the weakness, while the opposite is usually true. You should never stop learning and never ever think you know everything. Like I do.

So with that opening salvo out of the way here’s a selection of random, possibly useful nuggets about running a company that may be useful to those who are thinking of embarking on such a perilous, foolish, wonderful journey.

Because you really can’t, and shouldn’t do everything yourself. You’ll probably break.

But pick your partner with care. Check them for diseases. Give them an MOT. Put them in a range of frightening war film scenarios. Think about how they would react. And if that seems hard think about what it takes to carry the weight of a company all on your own. The fact is you need partners to make your life easier. Your skills and interests should compliment and balance each other out.

Which leads to this…

So we once did an exercise with a friend of mine who does business coaching. It involved listing every single job in the company (no job too small, from emptying the bins to who get’s the work in), putting a name to who did what, and who wanted to do what.

What that achieved was it helped point out where the gaps were. Here’s a pointer, fixing who takes the bins out is an easy fix. Fixing who’s in charge of business development is not.

It’s sounds simple and obvious but it’s a very useful thing to do. You may be surprised/horrified by the answers.

Are you going to be a service company or a products company? It is possible to be both but darn, it’s tricky. Lines get blurred and resources get poached. You need clear boundaries and bodies dedicated. And once you start on the path of being a service company changing direction can be like changing the direction of a large and heavily laden oil tanker.

Here’s a thing though. Someone that’s worked in an agency where margins and efficiency are your lifeblood is a pretty handy person when it comes to developing your product. Someone that’s been at the coalface of making all manor of ludicrous budgets work.

And look, this leads nicely to…

Yo, keep them overheads low 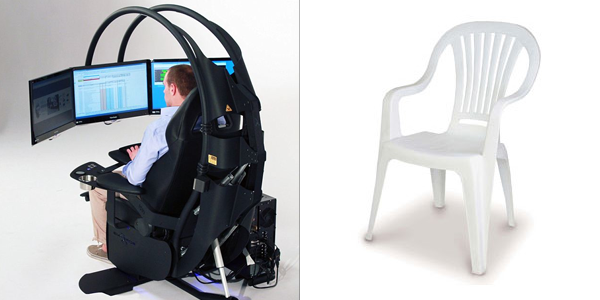 Two chairs used to symbolise the growing gap between rich and poor/what you want & what will do.

Do you really need to go to every conference? You don’t need business class do you? Do you really need an office in the thick of a big beardy hipsters roundabout? Do you need an office at all? What about that fancy lamp? Or those reclaimed scaffold desks? What do you actually need to get things off the ground? It’s people isn’t it? Highly talented, skilful people paid a decent living wage. Aim for that. If all goes well then you can buy a fancy jet and fill it full of foosball tables, personal tattooed baristas and M&M dispensers.

Good tip: if you want to fit out an office on then check out a local bankruptcy auction

And while we’re talking money…

Where’s the money at?

Over the years I questioned why we weren’t doing more work for the cultural sector, museums and such. Until we realised that most of the time we couldn’t afford to. That’s not snobbishness or about making money. It was about not embarking on a project we could not afford to produce. About survival.

So when you start thinking about your idea consider this, is it a business with a revenue stream market and all those other filthy filthy business words? Or is it ART?

That doesn’t mean that something that’s art can’t sell if you can find an audience. I imagine the benchmark is whether it’s just you and your immediate circle that likes the idea or if others like it too. Try it out and be prepared to take a jolly good whacking. A good whacking will teach you a thing or two, you little scamp.

Any if you’re thinking of starting an agency, what’s your selling point, who are your clients, do they have money, do you care enough?

Also filed under this heading: profit is not a dirty word, don’t get bogged down by systems, have enough rules but know it’s OK to break them, time actually is money, first prize, a set of steak knives.

Things are always be changing

Welcome to the 21st century. No, wait, in fact things have always been changing. Look at music (Napster, itunes, Spotify) look at TV (iPlayer, Netflix), look at games (Free to Play, the App Store), it’s all changing the whole time. Maybe it happens faster now but disruption is a constant. Records, to CDs to MP3s. VHS to DVD, Blu Ray and streaming, Greeks to the Romans, Sean Connery to Roger Moore via George Lazenby.

Be aware and be prepared. If you’re working on an idea that will take a year or two years to build will the market, technology or platforms still exist?

Also beware of people who speak with authority about what will or will not be the future. They’re making gambles like anyone else, however educated. No one can predict the future.

Another thing to think about, if the game changes so much that it becomes something you never wanted, then it’s time to get out, otherwise be ready to adapt. 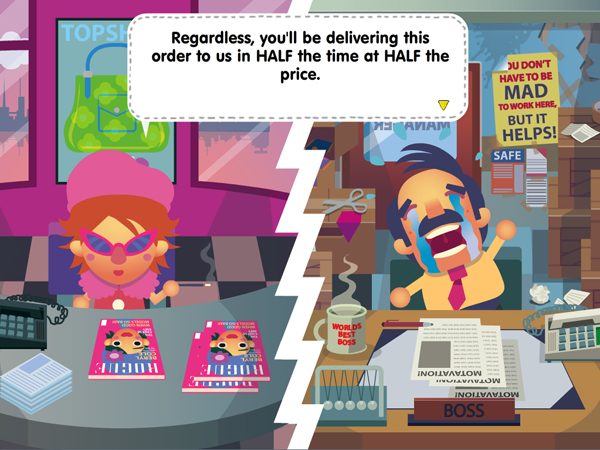 For some reason this image has found itself in this section.

I once had a conversation with a friend who used to be client side, and who is now working agency side. They found it a real eye opener. How tight things could be. The impact of changes and demands. That no one was sat upon piles of money eating Kettle crisps. They thought that all the agencies that used to work for them were actually RICH!?!?!

Anyway. Work with your chosen people. Collaborate. Establish trust. You’ve hired them for their expertise right? Therefore listen to their opinions before making any rash decisions. Be aware of budgets and what the impacts of change will be. Be prepared to descope. And this is one thing I’ve definitely learnt from adding too much in, better to do something smaller and brilliant than sprawling and meh.

Write realistic briefs, be aware of what is achievable within a budget, if your ideas are bigger than the budget find more money, don’t squeeze your agency. Don’t just take it from me. Listen to someone who actually commissioned things.

Be honest, be open. Go forth. Make beautiful things together.

Let’s make it a good place to work 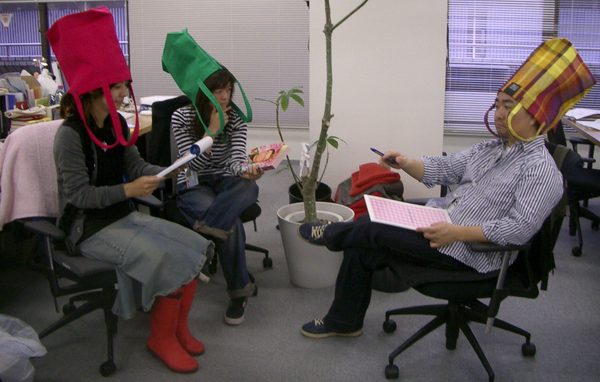 Because if it isn’t, it’s your fault and you won’t want to work there either. This doesn’t mean installing a giant slide or employing an office masseuse. It’s about being able to manage people and play nicely with others. This is something we just have to learn and isn’t something many of us were trained to do, but it’s something we should strive to be good at.

It’s about looking after your employees. Hold them close to your chest (or at an appropriate distance), but allow them enough room to make mistakes. Nurture growth. Let them learn, and lean on them when you need them. Admit that sometimes they may know better. Hire people that are smarter than you. Also ones that know more about the thing you really need to know more about but don’t really want to do.

I could go on, but I may run of internet. So instead one last thing on failing, or learning, being mildly successful, or perhaps letting go.

Knowing the right time to call quits on something, whether it be an idea, a company or a much loved pet can be tough. But it can also be the best and the right thing to do.

And here’s another thing. When things fail we also grieve. We often think about grieving for people, but for certain things the process can be similar. There’s a sense of loss, anger, of uncertainty and a search for meaning. We want to learn something from it. As Doctor McCoy once eloquently put it, ‘Turn death into a fighting chance to live.’

Sometimes things run their course and it is the right time for them to go. The honourable thing then is to come to terms with that and let them fail as gently, honestly and gracefully as possible, with as little collateral damage as possible.

After thirteen years we closed our company last year. It was hard. But maybe not as hard as I thought. The main fear was change, but at the back of your mind there was a nagging thought about failure and what it means to fail.

But of course it wasn’t failure. How could it be with those wonderful people we employed for many years, all the things they learnt, all the great things we made, the shiny trinkets we won. All the different projects and experience gained. All of it has immense value.

And if you’ve learnt, maybe it’s not so bad after all.

I was invited to talk at London Educational Games Meetup (aka #LEGup) with the theme of the night being failure. I couldn’t make the session, so was asked to write a post about the theme of  failure.

Header illustration by me.