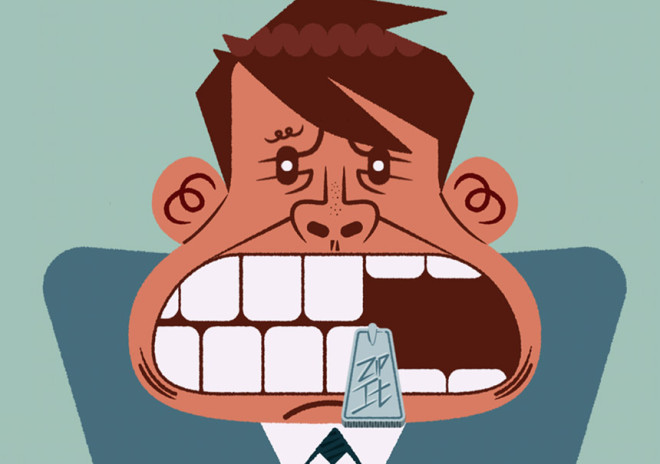 A friend of mine once told me the story of his turbulent schooldays, of how he was expelled from school before being eventually being sent to a private school as a final resort to save his education. This worked to a certain extent but as the new boy on the block, he was bullied extensively.

It sounded like he had a terrible time, so I asked how he dealt with it. His related how he tried various approaches, (fighting back, keeping a low profile), but his role as victim only stopped when he started picking on the next new arrival. At this point the bullying stopped. The bullied had become the bully.

It was this story that I had in my mind when we started Sticks and Stones, the last game from my previous studio, Littleloud. Some of the games we made were put under the banner of educational games, and were sometimes filled under the heading ‘serious games’. That’s not a label I particularly like (we don’t have a serious books section in Waterstones, or have a genre classification for serious films). I understand the need for that label, much as comics span the term ‘graphic novel’ in the eighties, it’s helps the casual viewer understand that there may be something different from what their pre-conceived notion of what a game is. I prefer to think that we made games that happened to be about something. And were, you know, fun. Sticks and Stones was no different. Here’s what it’s about.

It’s a game about bullying.

It’s not a game about bullies. 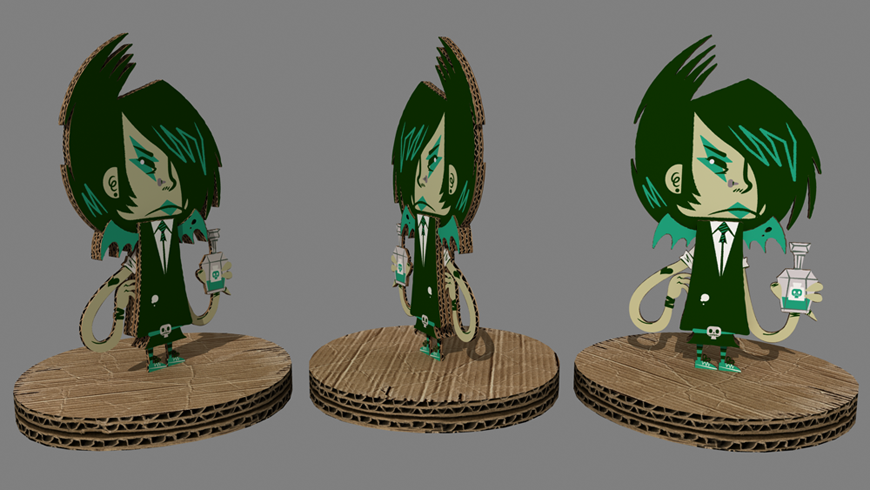 Sticks and Stones was originally commissioned by Channel 4 Education in 2012. The original brief was they wanted something that involved micro/mini games, that was about bullying, and  that it could work well on mobile. In the game you play as one of four new students at Northshore Academy. As the new kids you start the year at the bottom of the social ladder. The only way to gain the ladder is to gain Kudos by playing mini games and by moving along the game board towards the end of the school year.

If games are systems, and subjects lend themselves to games as they are a system, the school social system has the potential to be one of the most tricky to navigate. In all small games like this we couldn’t explore it all, so the journey of the characters became more akin to a fable. We would take the players and characters along a short journey and leave them with something to think about at the end of the experience. As with Sweatshop we wanted the player to think about their own decisions within the game as they played through.

First we had to move beyond the traditional view of the school bully, which has moved on from the days of Gripper Stebson (although some still hold him in high regard). An early conversation with our consultant, James Dawson (an ex- teacher specialising in PSHCE & behaviour, now a writer), informed us that schools avoid focussing on the individual and looks instead at bullying behaviour.

The thinking behind this is, besides not tarring and child with the label of bully, is that it’s something that all people are capable of in certain situations. People who may not label themselves as a stereotypical bully. Also the concept of bullying is not confined to childhood. It’s something that can follow you through school, right into the workplace. Even our biggest institutions aren’t immune. And while we’re in the area gaming has it on numerous fronts. 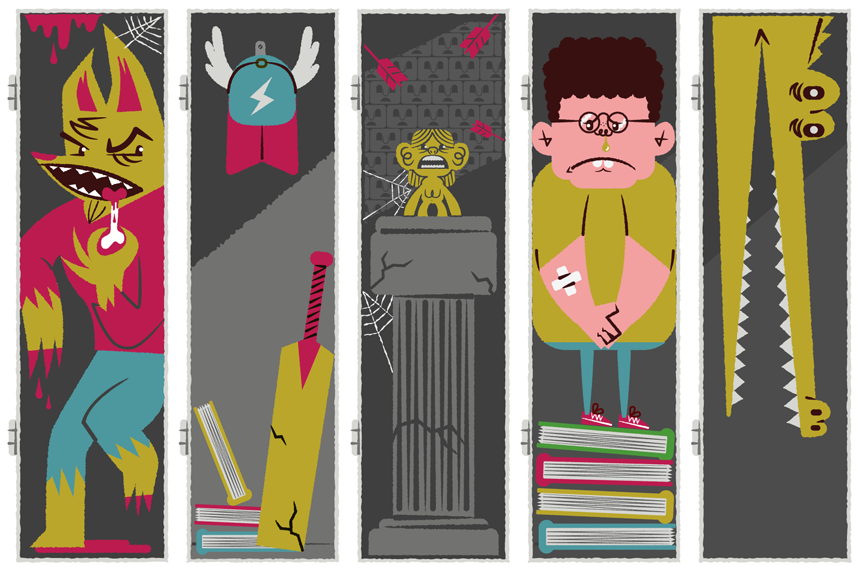 Art assets from one mini-game including a Chachapoyan  fertility idol

Trying to develop a story through micro games is difficult though (a good example of where it works well is Anna Anthropy’s dys4ia). Also developing mini-games is a more taxing approach than you might think. Instead of making one game and iterating on that, you’re making multiple games and trying to make them ALL good. So while the mini-games are aimed at the different roles of bullying and victim, they are framed by a larger story of characters moving round a game board and a scoring system to reflect the player’s social standing. This board was prototyped and played on paper as were the initial mini-game designs. 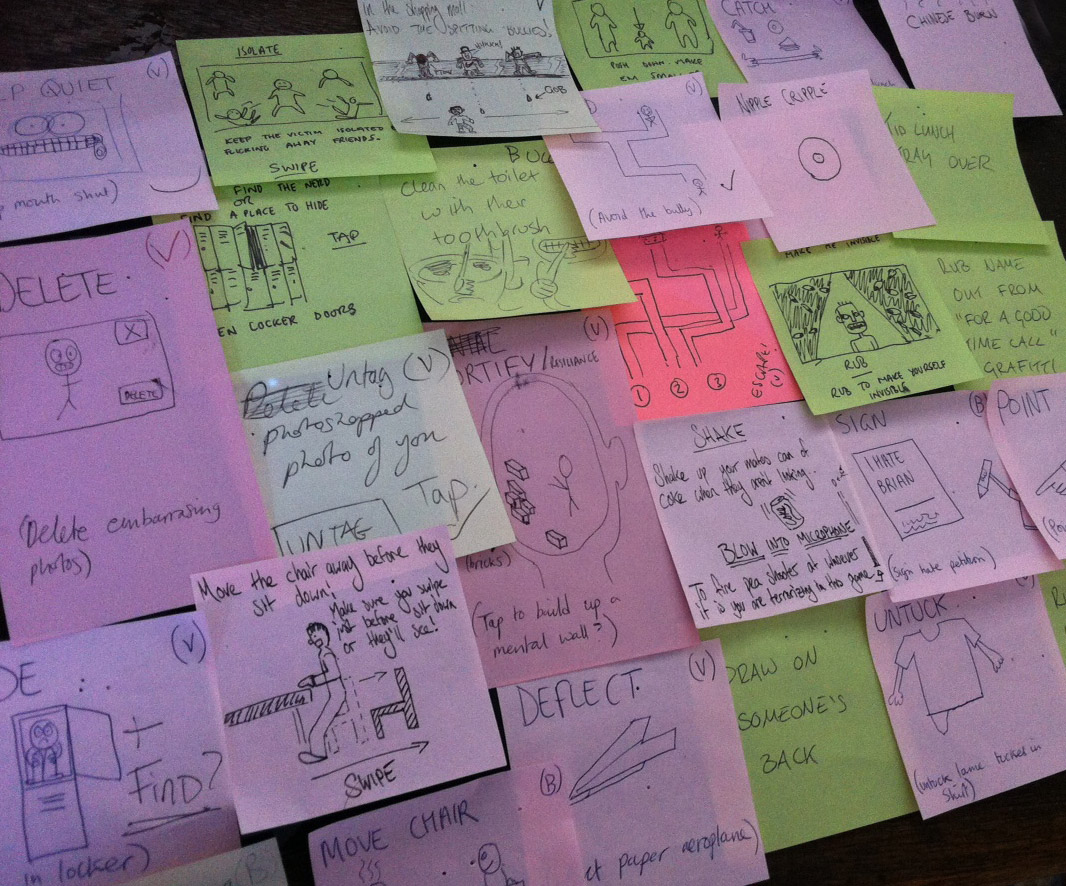 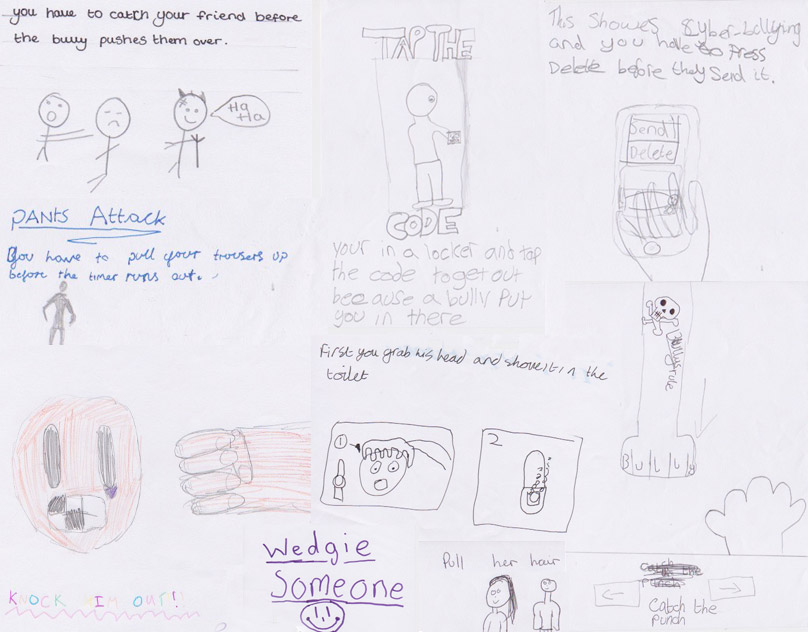 Ideas from the school had a fairly even mix between wedgies, bully and victim games

As part of this design process we also went to our audience by contacting a local Brighton school and asked them what they thought  about bullying. Rather than go in directly to question their experiences, we asked them to think about how these thoughts would translate into a game. As well as the more ‘traditional’ methods in some of the ideas (we got quite a few heads down toilets), it was clear that technology was something they thought about a lot.

Designs for an unmade mini game

In September of that year a small team of us pulled apart the board so we could put it all back together. Gone was the circular board, and in was the the side on view. More than just a visual change this meant the journey could take place as we originally intended over four school terms, each one in a different season. We also added different pathways through the board to add choices of high and low risk. 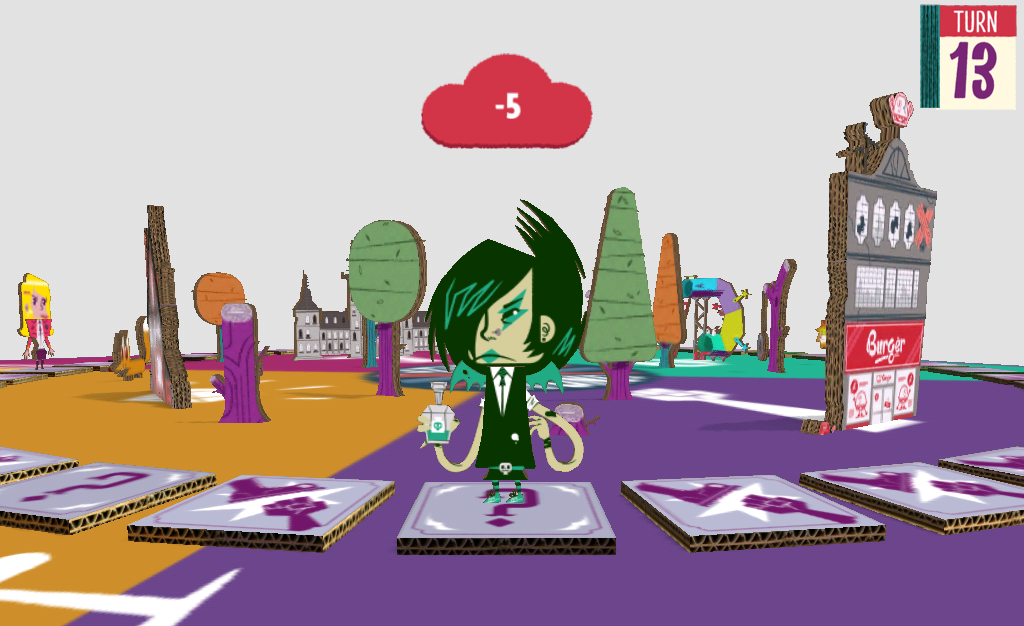 Although the temptation was to add more mini-games and other functionality it all came down to making what we had better. And that was what we had. The first version was good. The second version was better. 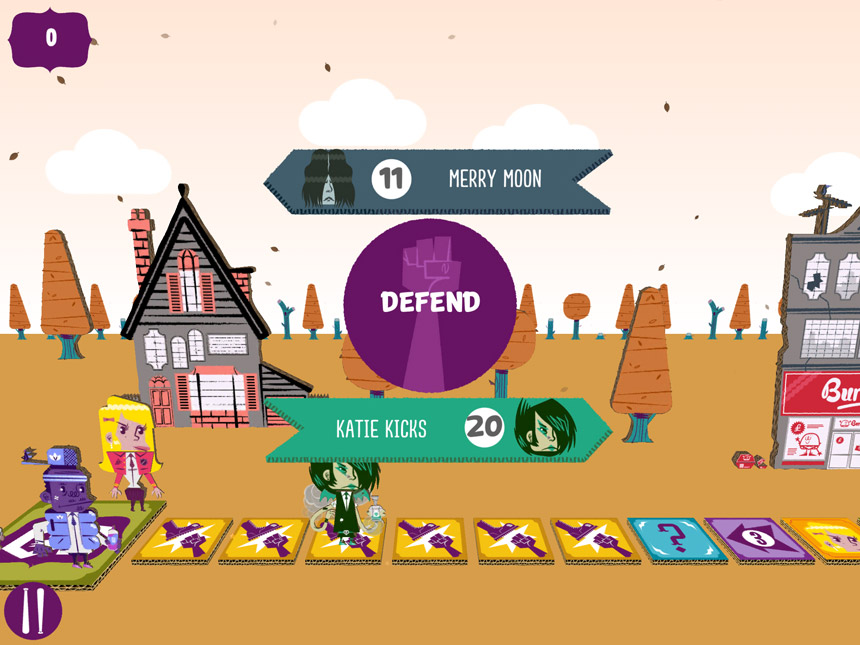 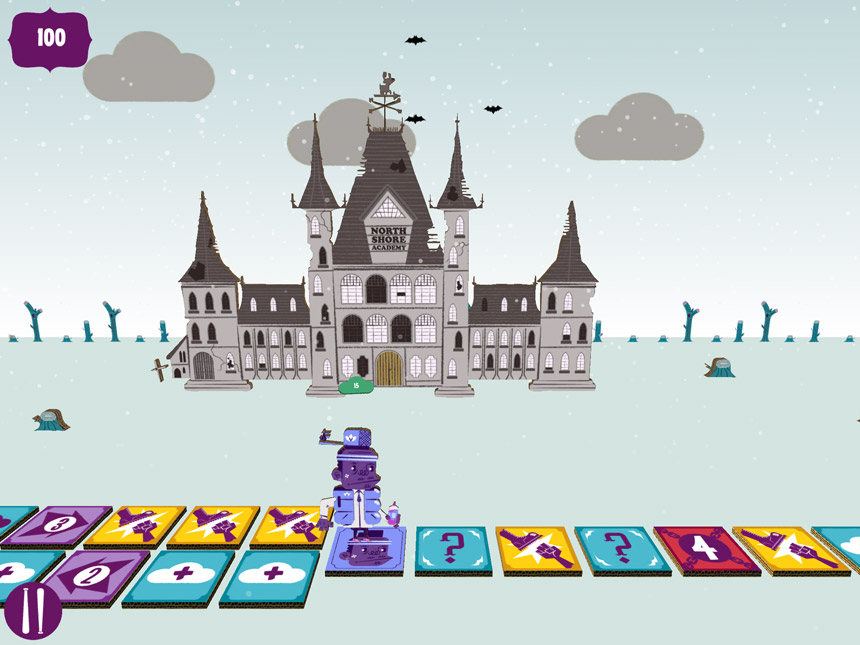 As with Sweatshop it’s not a game with a strict agenda. There’s no single solution to bullying, but what Sticks aims to do is to make the player think about the times they have been victim, and maybe perpetrator. Anyway, it’s out. It’s totally free. Go and play it. There’s absolutely no promotion, PR support or marketing budget for the project, so if you like what you see spread the word.

Sticks and Stones on the App Store.

Sticks and Stones on Littleloud.com.